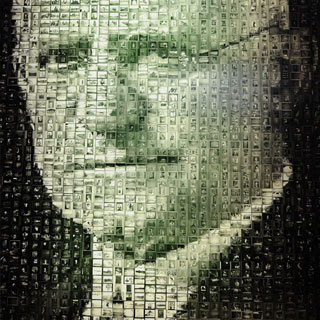 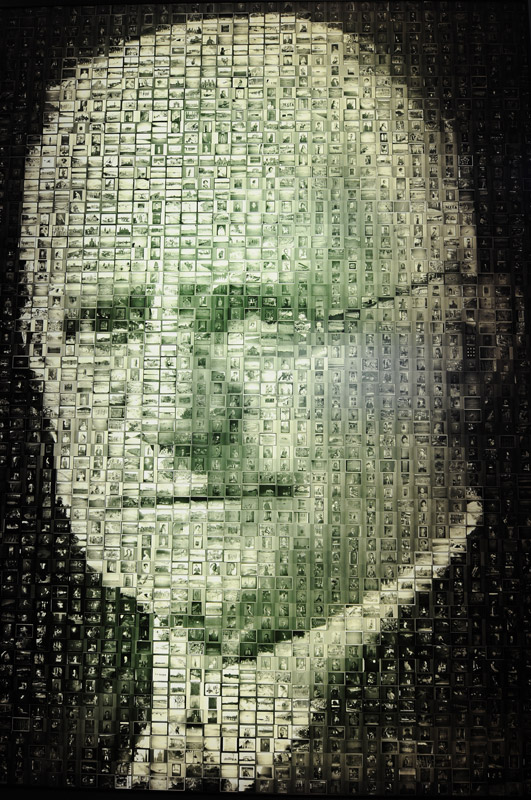 Recently, I was invited to the George Eastman House International Museum of Photography and Film (GEH), located in Rochester, New York, to speak and to present my personal work. This special opportunity gave me a chance to discover many facts I did not know about George Eastman, the founder of the legendary Eastman Kodak Company.I experienced firsthand, this incredible and vividly appointed historical museum, which is dedicated to his legacy. The George Eastman House was the actual home of George Eastman. It is where he lived most of his life. He also died there.

Eastman quit school when he was fourteen years old to take care for his widowed mother and two sisters. Photography, at that time, was his hobby. He had learned how to process and print his own photographs. But he wanted to make exposing and developing sensitive photographic wet plates easier to work with.

He began experimenting with what was then refereed to as “the dry plate process.” This was a huge evolution from early photography. It meant the photographer could create and expose his photograph whenever he liked, instead of having to coat the plate and then immediately expose it. Eastman was successful and he patented this process.

Years later, he devised an emulsion that could be rolled up on a spool, (roll film), which could be used for making multiple exposures. 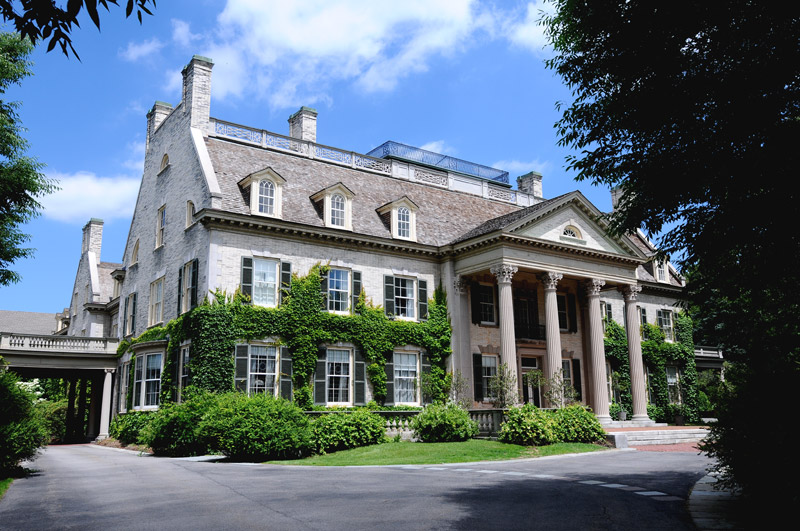 He realized he needed to market this new invention. That is when he created the KODAK cameras. The cameras came with the film pre-loaded inside them. They were expensive at the time, but, for $25, the purchase of a Kodak camera included enough film for 100 photographs of a 2½-inch circular image.

These first Kodak cameras gave families and the common man 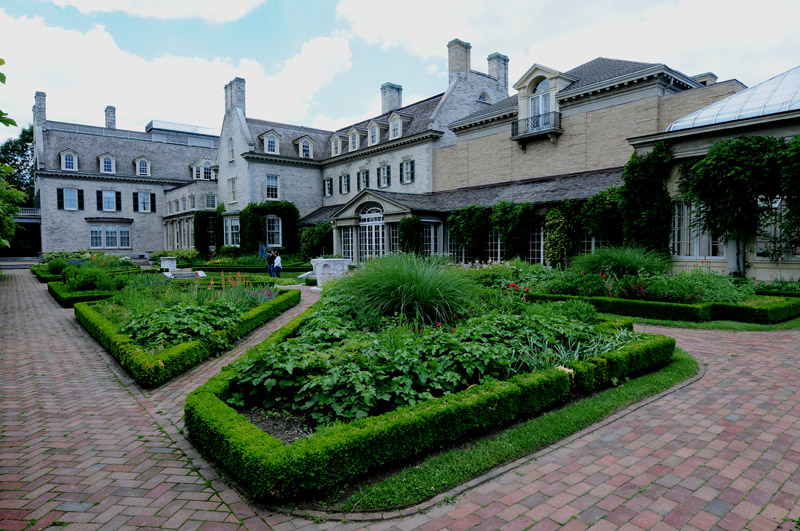 the ability to record, in a definitive way, their existence. “I photograph, therefore I exist; here’s the proof. I took that picture. Here’s a photo of mom and dad, in front of the house I grew up in”. It also allowed photographers to travel easily, (with the camera) and document places and culture’s never seen before.

Things have never been the same since. We can thank George Eastman for that. We can also thank him for Tri-X, Plus-x, Kodachrome, and all the other films photographers have embraced to make major artistic and commercial statements throughout the years. 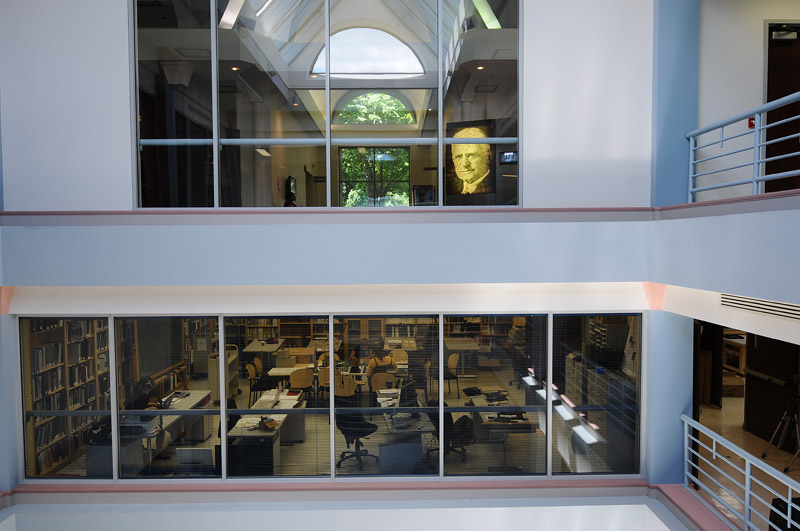 Eastman was also one of the most important American entrepreneurs to have ever lived. His contributions are comparable to those of Henry Ford, founder of the Ford Motor Company; Thomas Edison (inventor of the light bulb and many other things, whom Eastman worked with to develop motion pictures); and William Randolph Hearst, founder of the Hearst media empire and the character behind the film, Citizen Kane. 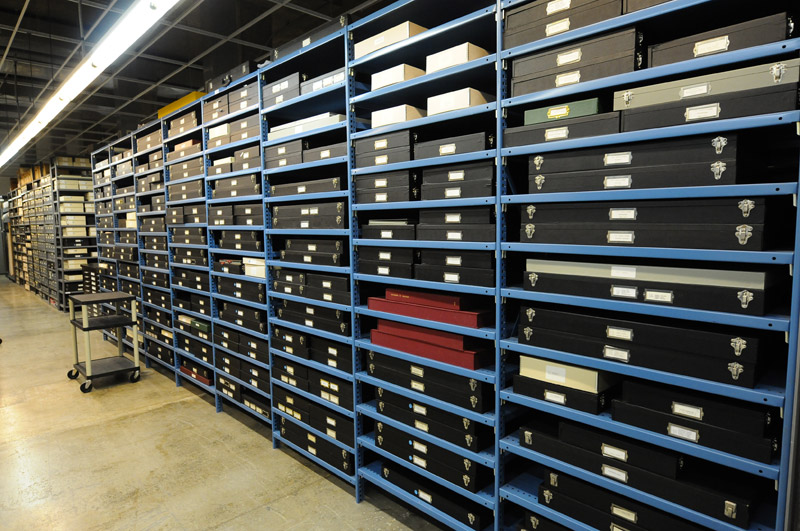 He acquired tremendous wealth during his lifetime, on par with that of John D. Rockefeller and Andrew Carnegie. He was a major philanthropist, as well. He gave most of his personal fortune away to support education and health care. He gave substantial amounts of money to two black universities: Tuskegee institute and Hampton institute, which at the time was an extraordinary thing to do for a white man of his stature.

George Eastman was a complex man. He took his own life at age 78 with a single gunshot to his heart. His suicide note read, “Dear friends, my work is done, GE”. I encourage you to read more about his life, much of which is wonderfully revealed in Elizabeth Brayer’s definitive biography.

Eastman was an enormous figure in the history of the 20th Century and the growth of the nation. But even more important were his contributions to photography.

It is close to impossible to calculate, in any meaningful way, the significance of the contributions George Eastman made to the development of photography and motion pictures in the twentieth century. After all, he invented roll film, which, in my opinion, for photography, is comparable to ” the wheel” and its impact on modern civilization. I realize that may sound far-fetched, but the world of photography was never the same after the invention of roll film. It changed the way photographers and filmmakers could explore our world, document it, and artistically interpret it. It hit the world like a comet; we’re still under its commanding influence. 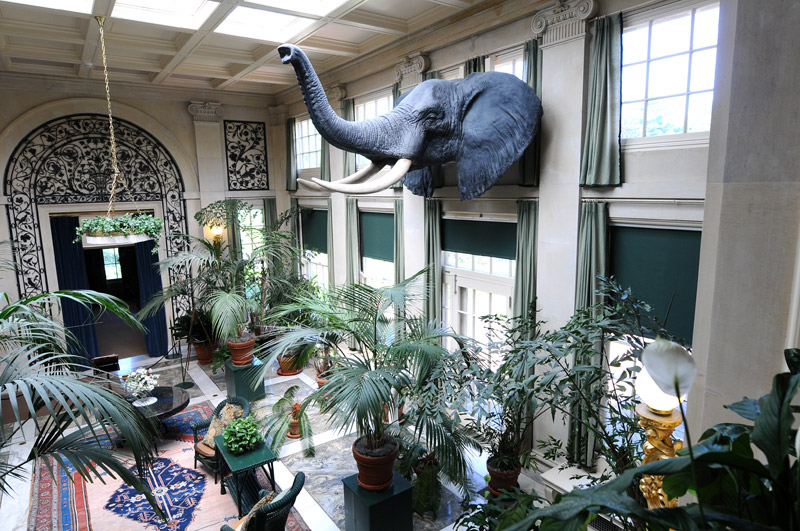 None of them would have been able to create that immediate sense of the event, to distill or immortalize a moment in time with the precision and passion they have shown without roll film loaded into their cameras.

It’s not that photographers before them weren’t able to create great photographs; they absolutely did. But it was cumbersome. By shooting on two-dimensional forms and working with sensitized metal plates (daguerreotypes), wet glass plates, and later, dry plates, with glass negatives, and using film holders, they created memorable and historical photographs. 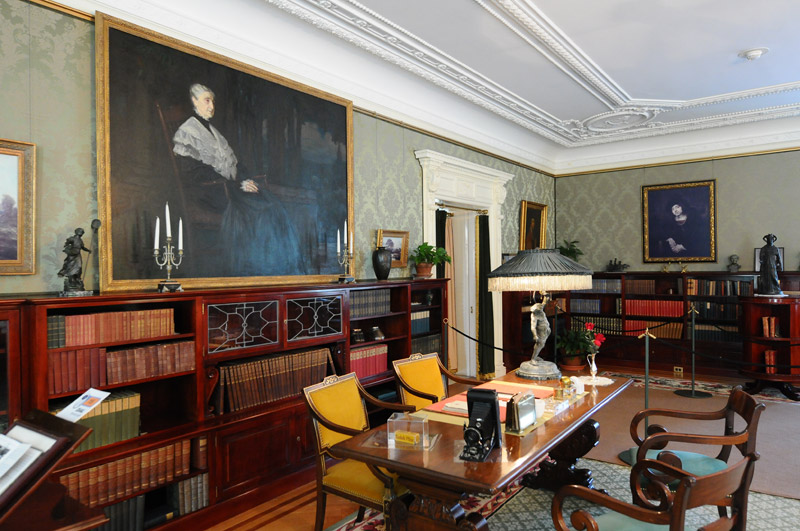 Think, for example, of the Civil War pictures, or those of the great French photographer Eugene Atget. The pictures were more studied, the framing of the photographs were securely set with the use of a tripod. These photographs included unique and artistic moments in time as well, but the style was different . . . Very different. They were unable to capture that sense of random discovery embodied in the spontaneous and explosive “Decisive Moment”, so well artistically accomplished by Cartier Bresson. Hand held photography revolutionized the medium, allowing photographers to compose in kinetic ways, new ways that were visually stimulating to view and experience. They gave a new meaning to reality. 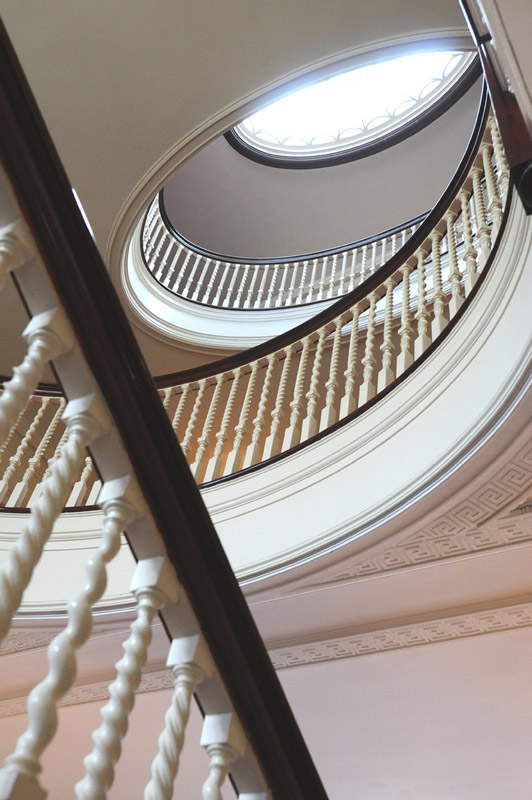 I personally viewed a portfolio of photographs by Edward Weston representing work he had done at Point Lobos in Carmel, California. The portfolio included many genuine, original, vintage prints. Personally, I’ve never seen them published or exhibited anywhere else before.

This illustrates, in a small way, the depth and exceptional variety of material that the Eastman collection contains. There are several galleries at the GEH, displaying many of their extraordinary holdings. Some are permanent exhibits. Others are newly conceived, installed and rotated throughout the year.

One of the more compelling exhibits houses the actual cameras 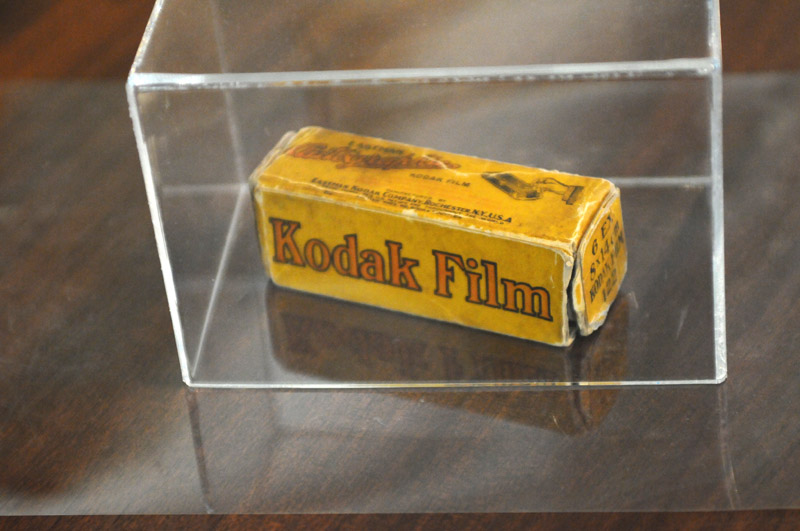 used to take some of the most historic and poignant photographs ever accomplished. These photographs are installed on the gallery’s walls. Directly below them, in a display case, are the actual cameras that were used to make the pictures.

For example, there is the famous WWII photograph, taken for the Associated Press by Joe Rosenthal, Raising the Flag on Iwo Jima. Right below it is the 4×5 Anniversary Speed Graphic (1940) that took the actual picture.

Most incredibly, GEH has the “STEERAGE,” by Alfred Stieglitz. This photograph is widely considered one of the most important photographs of the 20th century. Below it is the large reflex camera that contained a flopping mirror (much like the design of modern SLR’S) that Stieglitz shot the infamous still with. 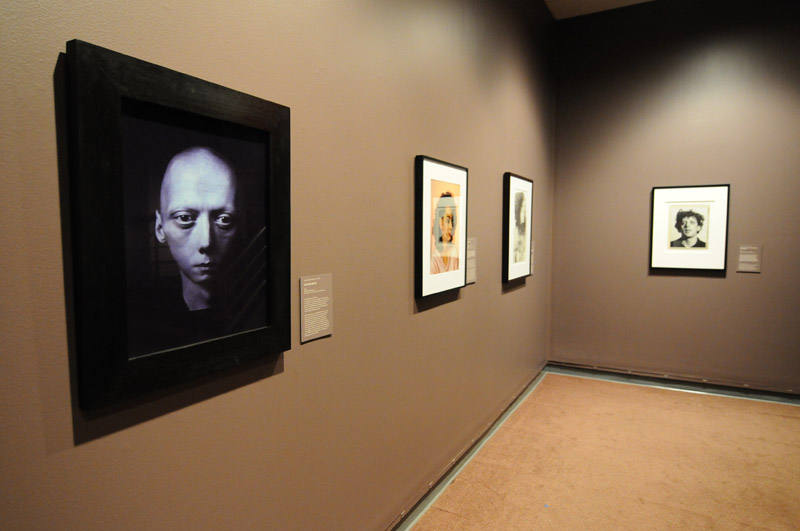 The collection reminds us of how important cameras have become to our history, to our collective sense of ourselves. This mystical magic box captures light, form and emotion. Without it, our human history could never be documented quite the same way.

Now we are facing the digital age, which again redefines how we perceive ourselves. The question resurfaces again, which probes, what is real and what is not real.It’s important to note that the George Eastman House also has an equally impressive collection on Motion Picture History.

The collection includes old motion picture cameras, projectors, and actual original prints of famous historic films, going back to the silent era. They have a beautiful movie theater where they run the old, restored films, as well as contemporary ones. 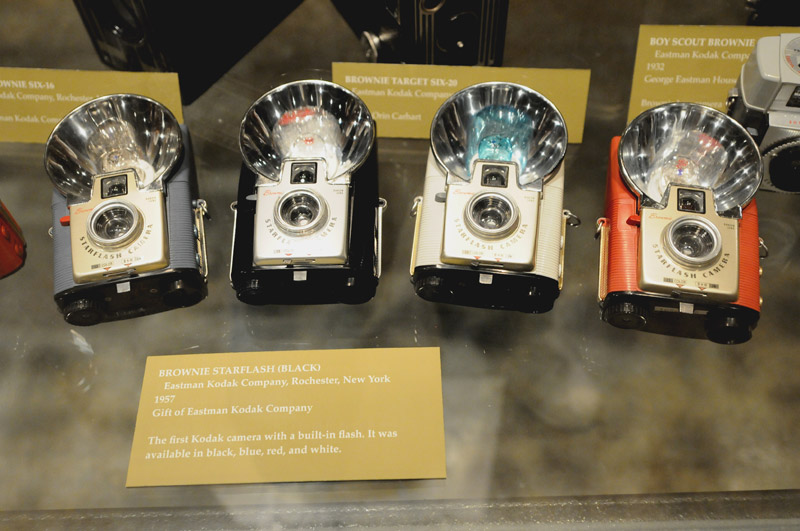 I fully recommend a visit to the George Eastman House in Rochester NY. It will provide an unforgettable experience. The visit will leave you with a greater appreciation of the history and significance of photography, especially the amazing contributions George Eastman and his employee’s made to the medium. 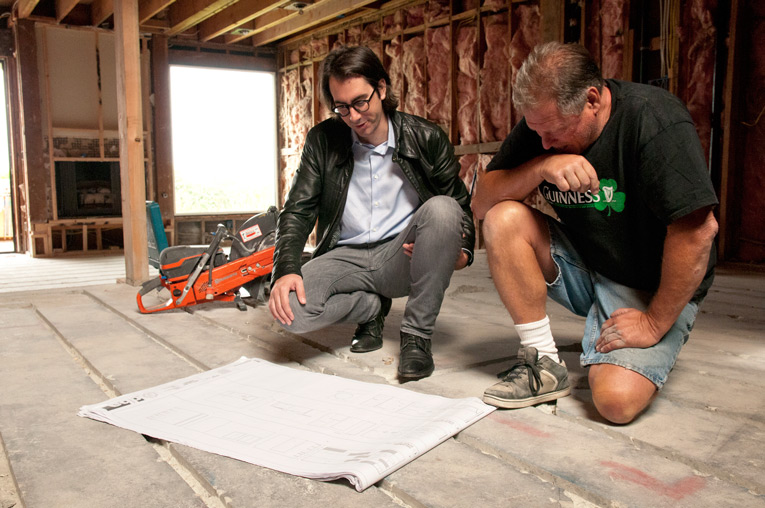