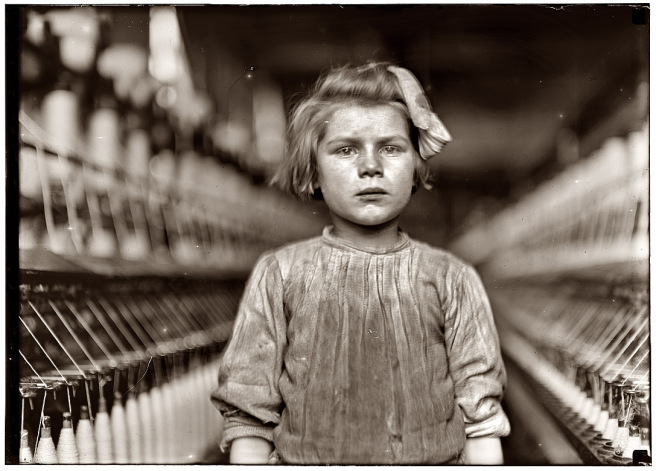 Imagine life at the turn of the 20th century.  Immigrants were flooding into the United States, many through Ellis Island (as dramatized in The Godfather Part II).  Thousands of Vito Corelones. Slums in cities like New York were full of crowded tenements.  There were few social services, no social security, and very lax child labor laws. There was poverty, disease, and violence.

This environment was very different from the one Lewis Wickes Hine (1874-1940) was born into back in Oshkosh, Wisconsin.  But after studying sociology at the University of Chicago and New York University he became a teach in New York City at the Ethical Culture School.  He became highly aware of the suffering endured by immigrants and the poor, and particularly the effects of unregulated child labor.  He learned photography and believed it was a tool that could be used for social reform.  He became staff photographer for the National Child Labor Committee in 1907, leaving teaching to pursue documenting the grim and shocking conditions created by the practice of child labor.

Hine was an early proponent of the effect for social change that could be achieved by documentary photography. At that time, the public was not very aware of the terrible practices and consequences that surrounded child labor. Children were often hired along with their parents and were valuable for such things as fitting into small spaces in factories or underground in mines.  This was dangerous and unhealthy work, many children were killed or disabled, they were prone to sickness and malnutrition and most did not get sufficient education to allow them to compete for work as they grew up.

Doing this kind of documentary photography was taken as a serious threat by industries that hired child labor and Louis Hine was frequently threatened with violence and often worked under covered using various disguises such as inspector or bible salesman.  His work was highly instrumental in making the public aware of the evils of child labor.  But creating laws to outlaw these practices did not come overnight.  Congress passed laws against child labor in 1918 and 1922 but both were declared unconstitutional in 1924.

It wasn’t until 1938 that Congress passed the Fair Labor Standards Act, which established a minimum wage, overtime pay and set youth unemployment relations that ended the most abusive practices of child labor. But, no doubt many of the congressmen voting had grown up with an awareness of Louis Hine photos.

But despite his enormous contribution to the culture, Lous Hine found that very few in the pubic were interested in his work at the time of his death in 1940 his work was largely unrecognized.  His photos were offered to the Museum of Modern Art but they declined.  He lost his house and applied for welfare shortly before his death.

Today the Library of Congress holds over 5,000 of his photographs and negatives and numerous examples of Hine’s work can be found at the George Eastman House and other organizations.

Like Civil War photographer Mathew Brady, Eugene Atget and other great photographers of the past, Louis Hine died broke and largely forgotten until enough time passed for the culture to recognize his contribution and celebrate his art and achievements.

ABOUT US
Servicing both the professional and amateur photographer community Since 1976, Samy's Camera's knowledgeable sales staff and exceptional customer service has made it one of the most trusted sources for camera gear and photography products. Samy's Camera's flagship store on Fairfax Avenue in Los Angeles has been the camera and video equipment store of choice for Hollywood's professional and celebrity photographers for generations. Samy's has grown to have stores and camera rental departments in Pasadena, Culver City, Santa Ana, Santa Barbara,San Francisco and now services ships nationwide from Samys.com .
Contact us: socialmedia@samyscamera.com
FOLLOW US
Cameras © Copyright 2016 - Samy's Camera
Back