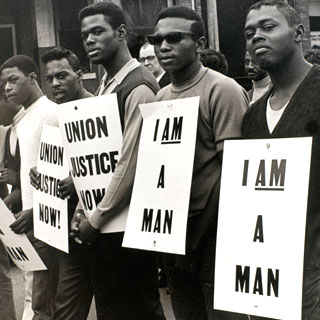 I find it unfathomable that human beings could treat each other so horrendously, based simply on the color of one’s skin. To me it sounds like a bad science fiction novel. But as time has shown, truth is stranger than fiction when it comes to human history. 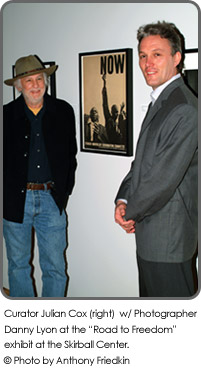 Centuries ago our country fought a brutal civil war to end slavery in America and free the black man. Yet to this very day, the color of one’s skin still plays a large part in our personal identity, our national politics and our sense of community. Here in Los Angeles, I once ventured into a Black Art gallery on La Brea. To my shock, there were multiple panels of large photographs documenting the gruesome public lynching and torture of young black men. Mostly taking place in the south, this appalling activity went on in America through the early 1930’s. Numerous photographers were hired to take pictures of the lynchings. Many of the subsequent pictures were made into postcards.

This represents an outstanding example of how the medium of photography can reveal and preserve historical evidence for us to collectively interpret. Often, and significantly, the photographs can be sickening and disturbing to deal with.

This brings me to share with you, and on a much more positive note, an outstanding exhibition making its West Coast debut, and currently on view at the Skirball Cultural Center, entitled “ ROAD TO FREEDOM; Photographs of the Civil Rights Movement from 1956 through 1968.” The extremely talented and perceptive Julian Cox, Director and Curator of Photographs at the High Museum in Atlanta Georgia, originally created the exhibit. The exhibition features more than 160 images that helped change the nation, as well as related historical objects. Taken by photojournalists, social activists, and anonymous witnesses, these compelling photographs exposed the injustice prevalent in America at the time, promoted solidarity among citizens, and dramatically increased the momentum of the struggle for equal rights.

Exclusively for this Southern California presentation, the Skirball has developed a new section, focusing on Los Angeles’s civil rights history as well. Displayed in the galleries are telling images of our own struggles, as Angelenos, to grapple with the “movement” and its underlying problems. 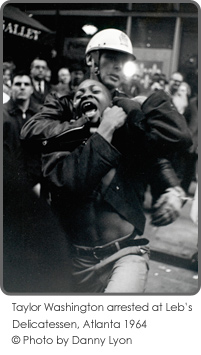 Interestingly, all the photographs are in black and white, the two very colors which symbolize the conflict between whites and Negro’s (as they were referred to then).

One of the photographers critical to the movement was Danny Lyon, a white photographer from Chicago who was only 20 years old at the time. For those who are not familiar with Danny’s work, he is considered one of the finest photographers to have ever attached himself to numerous and significant American causes and subcultures. His work in this exhibit is only one example of his many extraordinary photo essays. He has an amazing grace with his camera, a wonderful eye, which only great photographers have. Clearly he is one of them. I suggest you look him up and discover his important contribution to photojournalism, as well as the art of photography in the many books he has published through the years.

One overriding aspect of the exhibit is that it truly celebrates non-violence. This was key to what Martin Luther King, Jr. believed, and in his wisdom, it proved to be enormously successful. For example, there are no photographs of Malcom X (who believed in violent revolution) in the exhibit, and that was intentional. There are many vivid examples of this.

Above all, one-photograph shows instructors teaching non-violent strategies to potential student protestors. The instructors purposely and dramatically act out, striking and yelling at the students. This was to teach them to keep their cool and not respond in kind with violence when they were attacked by the police or violent segregationists.

There are many photographs of black protestors and students which document the protestors being blasted with high-powered streams of water coming from fire-hoses or being seized and attacked by German Shepard dogs. One photo shows some young black women being beaten by whites, just because they went shopping at an “all-white” department store. The Civil Rights Activists, although fearing for their lives at times, kept their commitment to non-violence.

Particularly interesting to me was a group of nine photographs that documented a gruesome attack on a Greyhound bus filled with “Freedom Riders”, and a few black journalists. This took place in Alabama on Mother’s Day in 1961. The series illustrates the bus being set afire with the protestor’s in it. Miraculously, and at the very last minute, they were able to get out of the incinerated bus. No one lost his or her life that day. However it does demonstrate the level of hatred and anger that the segregationists possessed. 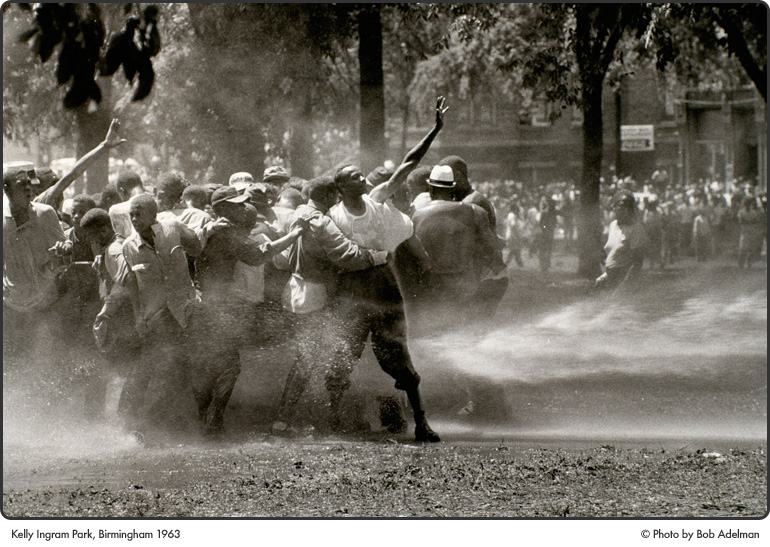 What is important about these photographs, besides what they reveal, is the fact that they were taken by an avowed racist, a member of the Ku Klux Klan. Most of the time, photographer’s who were sympathetic to the cause of the marches were badly beaten up or the segregationists destroyed their cameras and film. It’s an ironic twist of fate that the photographer who represented the KKK, and was allowed to shoot the gory details about the violence and destruction of the freedom bus, would have his work later appear in this extraordinary exhibition, which supports the very thing he hated most, integration and equality for black people. 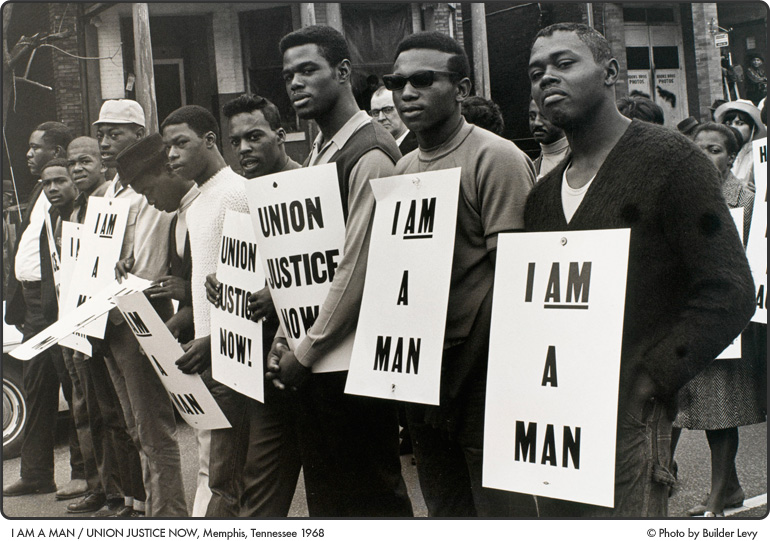 Another provocative aspect of the exhibit is the fact that some of the photographs were shot as “RE-CREATIONS”. For example, photographers took out Rosa Parks to recreate the day she boarded a bus in protest of blatant racism, sitting in the front of the bus (unheard of then in the South). She was arrested for this famed act of peaceful resistance, and her single, dignified act of civil disobedience became a classic example for the civil rights movement. The photograph of her, in a way, is fiction, because it wasn’t actually shot the day she really was arrested. However, it still provided the press and media with a very powerful image of an older black woman, a bit weak and vulnerable, demonstrating her unwavering will to create social change. 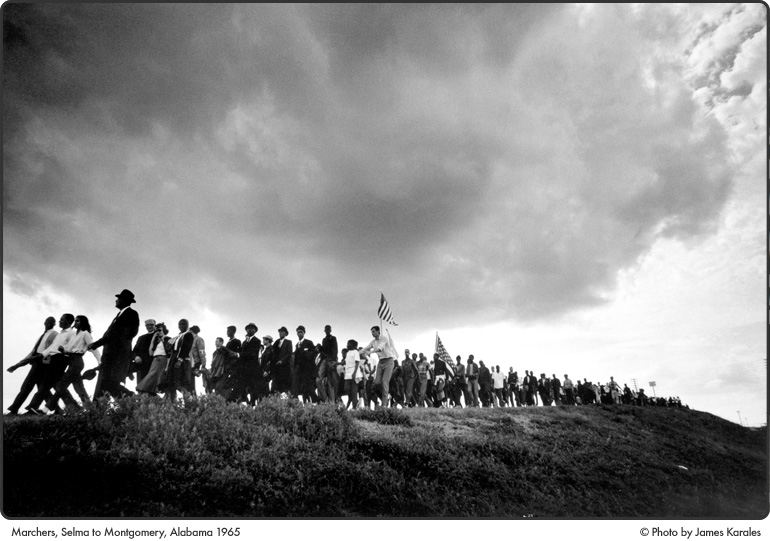 Many people believe that the extensive still photographic coverage of Martin Luther King, Jr. in his efforts on behalf of the Civil Rights Movement influenced his receipt of the Nobel Peace Prize in 1964. This is another example of how powerful the medium of still photography can be in swaying world opinion.

Important to note is a companion exhibit to “Road to Freedom” titled “BREACH OF PEACE;” photographs of Freedom Riders by Eric Etheridge. These photographs of several Freedom Riders, now senior citizens, alongside their original mug shots, examines their involvement in the Civil Rights movement. We see who they are today, and share their unique perspective on that historical period. This exhibit is definitely worth viewing, and quite different in tone than the other.

The Civil Rights movement was a long and challenging affair for America. Many fine people, including children, gave up their lives to fight for racial equality. Their sacrifice should never be forgotten. Important federal laws, validating humanity, were passed as a result of the movement. Many of these laws, which didn’t exist before the Civil Rights movement, now guarantee the rights of individuals of color to be treated equally and not be discriminated against.

I highly recommend you see this exhibition “Road to Freedom” at the Skirball Cultural Center. This is especially true for parents with children or teenagers who were too young to experience the Civil Rights Movement on their own. This was a major event in our history, and all young people should know about it. The original historical prints are amazing to view up close. The affirmation of enduring justice, the determination of the human spirit to be treated equally and with respect is incredibly powerful and deeply moving.

Photographs can help define the way history is written. They can document the suffering people endured to make the world a better place for us all. “ROAD TO FREEDOM” is a treasure in the chest of great exhibitions. The photographs speak for themselves, underscoring what Martin Luther King, Jr. believed, that all men and women are created equal, regardless of the color of their skin, and should be judged solely by the quality and substance of their character. “Road to Freedom” is a wonderful and factual testimony to these values. 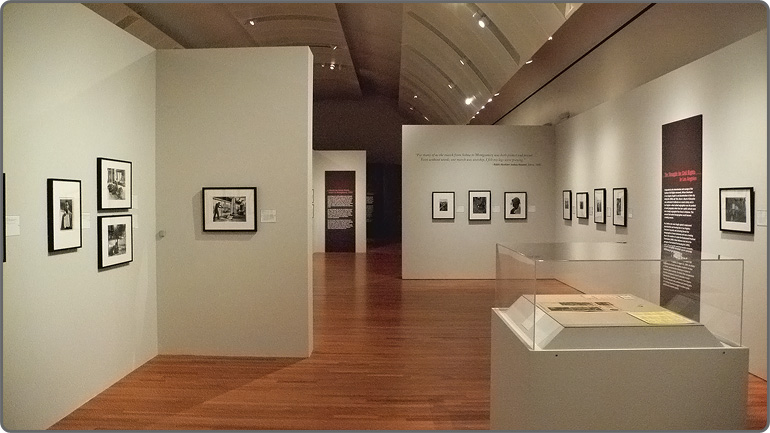 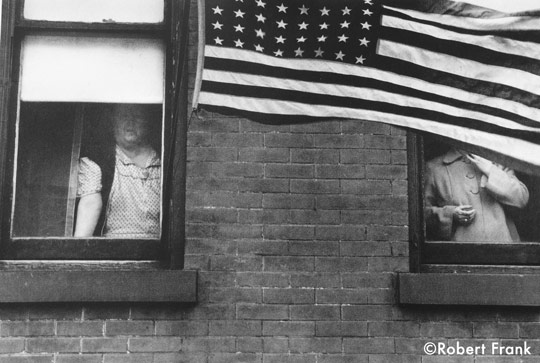 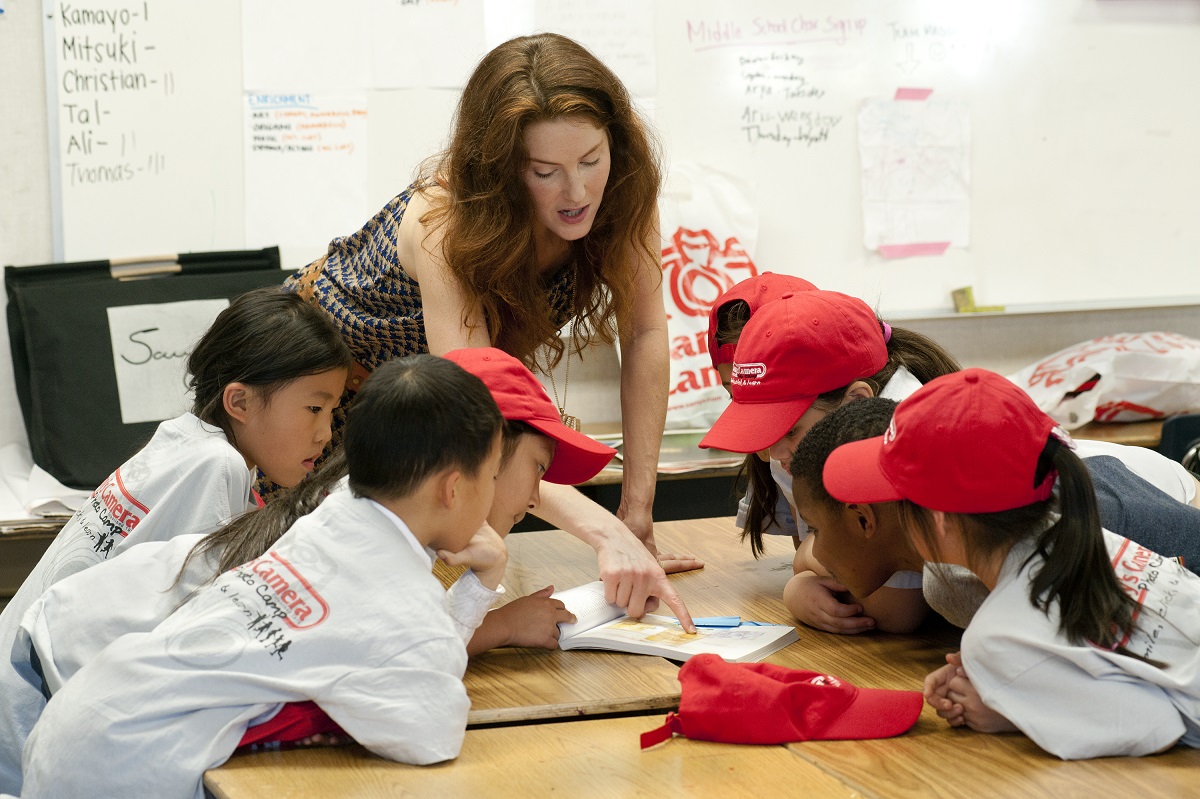 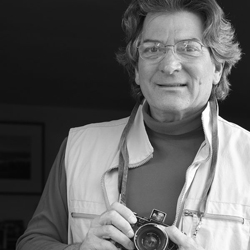