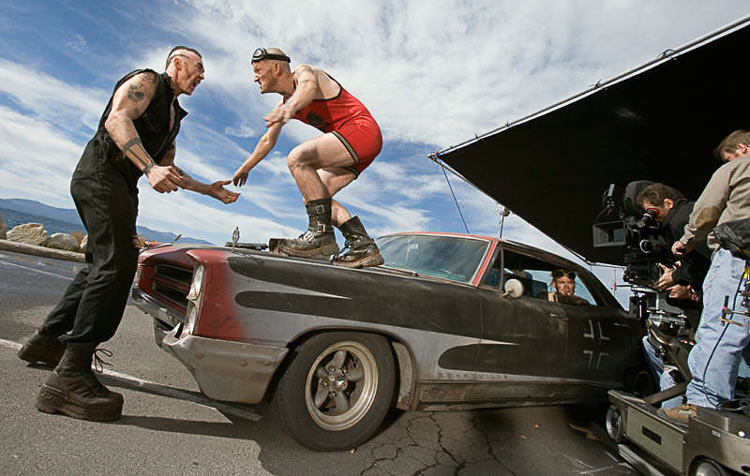 I am excited about a wonderful exhibition currently on display at the Academy of Motion Picture Arts and Sciences in Beverly Hills. The display honors individuals that are so often overlooked in our celebrity-driven world who are crucial in the making of films – The Crew. 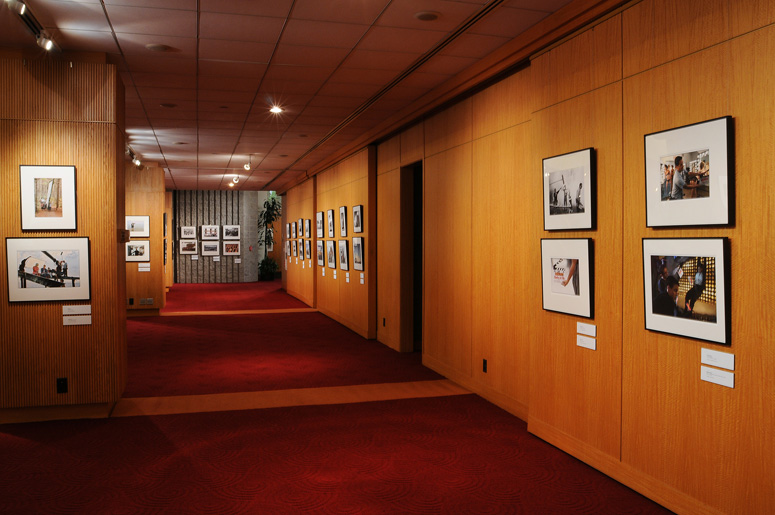 The Society of Motion Picture Still Photographers (SMPSP) returns to the Academy ‘s Grand Lobby Gallery. This show includes more than 115 new images, both in color and black & white, taken on film sets by 25 SMPSP members. What is unique about this is that the exhibition depicts the work of the numerous, essential “below-the-line” craftspeople on a movie set. 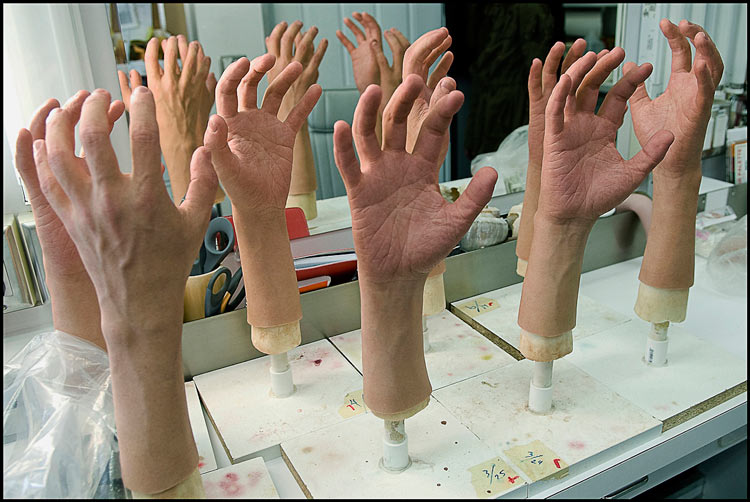 The images are a glimpse inside the magic achieved during the many long days and nights of shooting a motion picture. The subjects include professions that are rarely seen on the other side of the camera, from animal wranglers, puppeteers, makeup artists, seamstresses, stunt performers and prop masters to grips, gaffers and production assistants. One series of images illustrate how production design and visual effects departments work to prepare sets and stage action sequences.

For the sake of disclosure, I was one of the founding members of the SMPSP back in 1995. I’ve worked as a motion picture still photographer since the middle 1970’s.

The Society of Motion Picture Still Photographers is a nonprofit, honorary organization dedicated to the art of motion picture still photography. SMPSP was founded to promote the archival preservation of still pictures that are shot during the production of motion pictures for their inherent historical and cultural importance. SMPSP also provides a forum for its members to exchange ideas and discuss the ever-changing issues facing still photographers today. 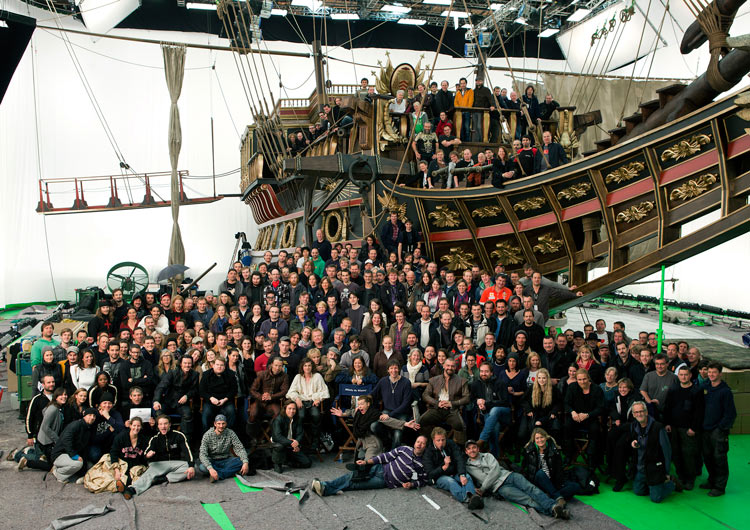 Sometimes referred to as the “Unit Still Photographer,” every motion picture has a still photographer on its set to document filming. We photograph the actors working on their scenes and the directors’ involvement with the creative process making the movie. Also, for historical purposes, we document the crew, the cameraman, and other craftspeople responsible for the creation of the film.

On the surface it sounds like a dream assignment for a photographer. But I can tell you from personal experience that it’s one of the most daunting and difficult situations a photographer can have. It demands that the photographer be stealth (invisible) to get their photographs without disturbing the actor’s concentration, the director’s intentions, and the crew’s ability to do their jobs unhindered. Sometimes, its just plain dangerous when situations, like explosions for example, must be captured on film.  You’re on your own to figure it all out, to survive, to get along with everyone and most important, to create some great stills.

Many times the still photographer must create a key set of stills, which the studio will then use to help sell the film. How films are marketed and advertised is a huge part of the movie industry with literally hundreds of millions of dollars spent each year by the studios to promote their films. The photographs taken on each film become instrumental in this process. 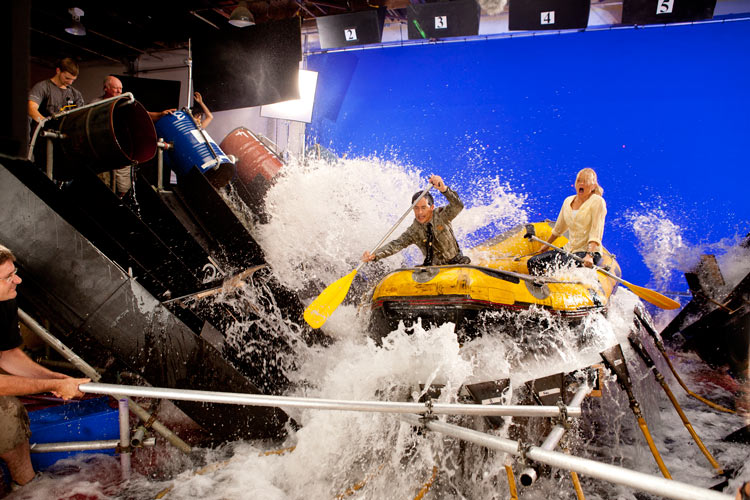 When big budgets and big stars are involved, the significance of unit stills is tremendous; there is a lot of money at stake. You can find two in depth interviews I’ve done with Hollywood photographers Douglas Kirkland andRalph Nelson (here in Samy’s Newsletter) that reveal in greater detail the numerous daily challenges that Hollywood still photographers face on motion picture sets.

SMPSP membership is very selective. In order to become a member, applicants must submit a portfolio for membership review. A photographer must be of extraordinary talent, show enormous dedication and have many significant films in their resume. Applicants must also demonstrate a deep commitment to the art of photography.

Andrew Cooper, Melinda Sue Gordon, Francois Duhamel, Brian Hamill, Merie Weismiller Wallace, David James and Rolf Konow are but a few of the highly accomplished members in this group. Each member has made significant contributions to the history of cinema and each if them have explored in detail the elaborate creative process involved in the making of motion pictures. The membership is international and includes some members based in Europe and Australia. 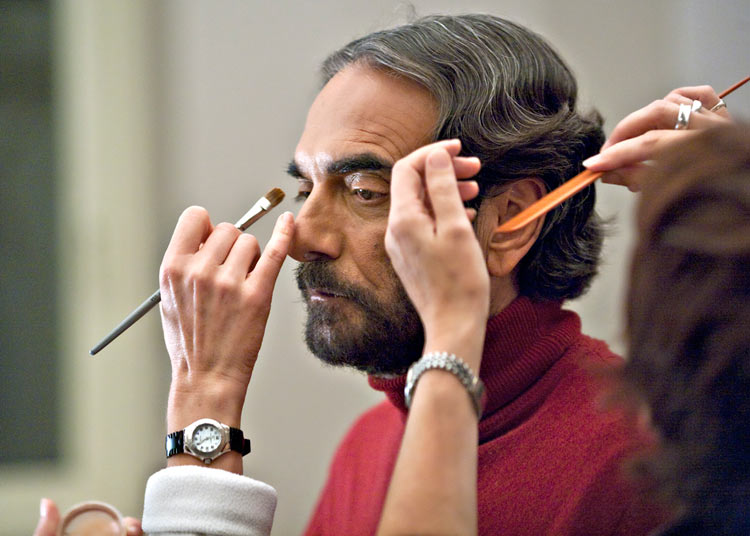 Many SMPSP photographers have historically felt that their contribution to the filmmaking process was compromised because the public only sees the work that the studios and actors have approved for their press kits. As important as this is (and it’s very important) they have felt their artistic contribution as photographers wasn’t properly seen or understood. Like the crew, their work was thus, in a way, anonymous and unappreciated for the art that it represents.

One of the more interesting aspects of being a still photographer is that we interact with the entire crew. We become part of their “family.” The actual set, where the actors will do their scenes, is a very precious space. Very few people are given access, close to the real drama being created by the actors exhibiting their craft. The movement of the motion picture camera during filming is like a well-choreographed ballet that includes the sound department, the camera department, the set designers, the costumers, props, hair and make-up artists, the script supervisor, lighting technicians and visual effects people.

Still photographers know that without the entire creative collaboration of every department on a set, the artistic goals of the film’s director and producers will not materialize. It is with this tremendous respect that we feel for our fellow crewmembers that the SMPSP chose to honor and document the crew. The results are fantastic.

This is where the secret to the magic is revealed. It is a rare opportunity, especially with these fine photographers presenting the crew. In a sense, the photographers and the crew are engaged in a dialogue that validates all of their distinguished and significant behind-the-scenes contributions. Recently, at the gallery I was able to catch up with David Strick. Strick is an honorary member of the SMPSP and one of our most gifted Hollywood photographers. He has a wonderful sense of humor about the process of filmmaking. His eye is superb and his images, at times, are downright hysterical and poignant. 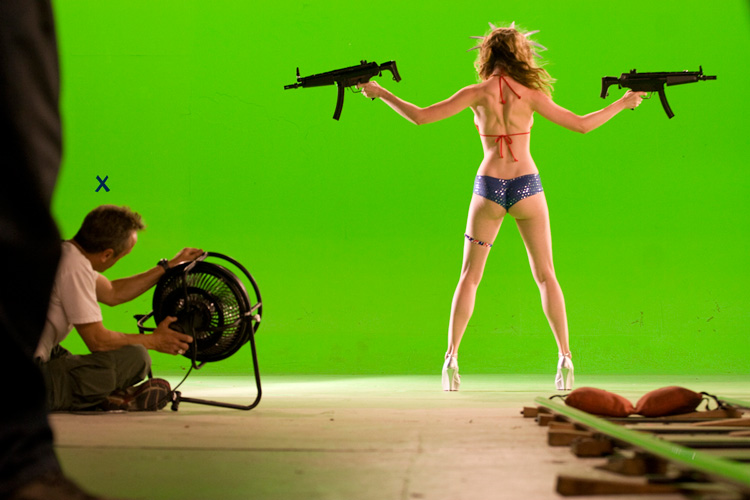 I asked David what it meant for him to be in this exhibit. His reply?

“It’s just great to be part of this community of great photographers whose work I admire a lot. I’m on sets often, on a semi-regular basis. Photographers tend to be, especially ones that work on movies and television sets, incredibly gregarious people because you’re working as part of a big team. Almost without exception, it’s great just to be around them; they’re all people who know how to get along with other people, and are themselves very, very nice, and highly accomplished.”

“You might say its photographers whose work doesn’t get nearly the attention that I think that it deserves (speaking of others than myself). I’m talking about people who do unit photography bringing even greater attention to the people who never get seen, the crew people, who are invisible. You might see them in a credit roll that last three minutes, and they are up there for about three seconds on the screen. This exhibit is an homage – a kind of “double homage”- to the photographers themselves and also to the crew they live and work with on a daily basis. The magic of filmmaking is that transition from reality to fantasy, thereality ofpeople working intensely to create that fantasy . . . To that fantasy, this gives audiences an idea of all the effort that goes into that.” 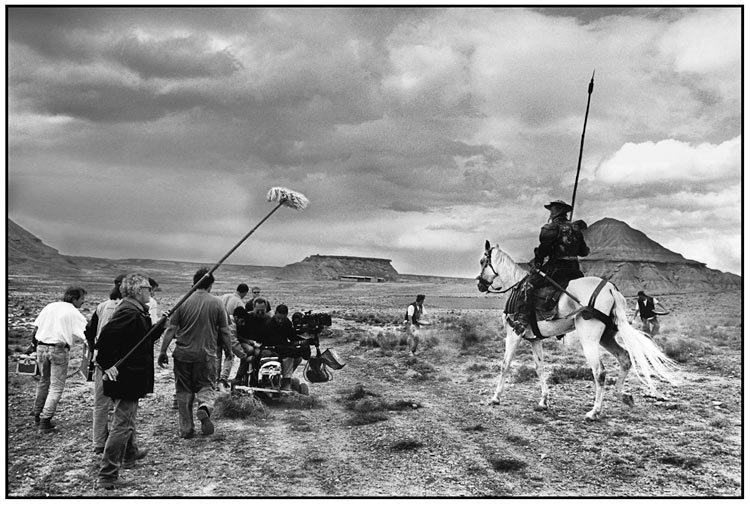 ” The SMPSP provides the opportunity to get to know other unit photographers and their work,” she replied. “Even though there is generally only one of us on set there is an entire community of photographers behind each of us.  The theme of the  ‘Crew Call’ exhibition illustrates the collaborative effort behind all film production and I love that we could showcase some of the artist-technicians we have the privilege to work with every day.” 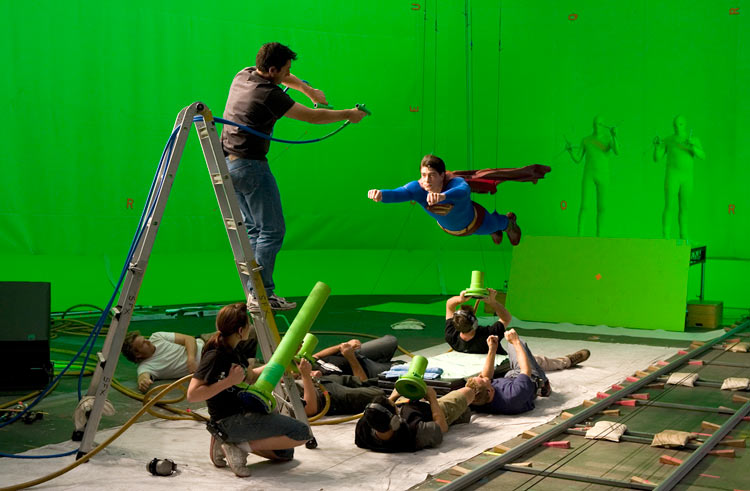 “Seeing the behind-the-scene photographers capturing behind-the-scenes is very popular because there’s an extra layer, the specificity of the show . . . the different crafts, the varieties of crafts, from the green screen to the props, to the Water Works, and the make-up department – the amount of work that goes into the making of a film and also, to the photography of the filmmaking.”

‘Crew Call’ is a wonderful insider’s perspective on Hollywood filmmaking magic and the real people who create the illusions. It is also a photographer’s exhibit of the fine photographic craftsmanship that goes into capturing the work of dedicated motion picture professionals. Come and see the magic of filmmaking through the lens of the still photographer’s camera. 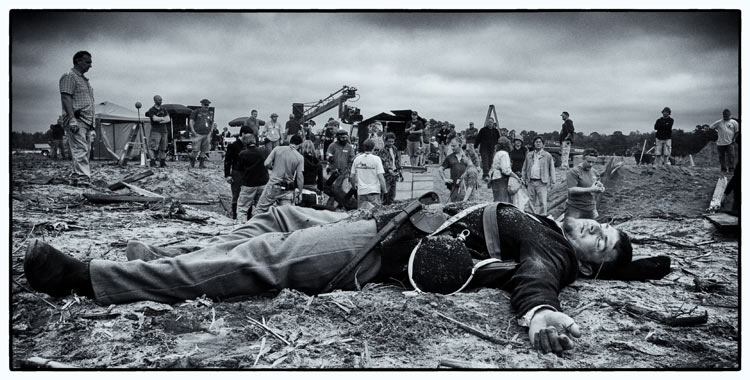 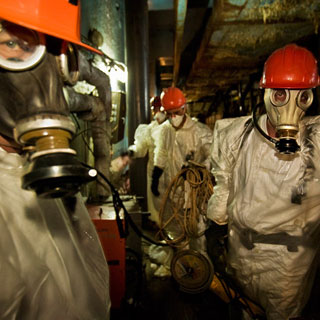 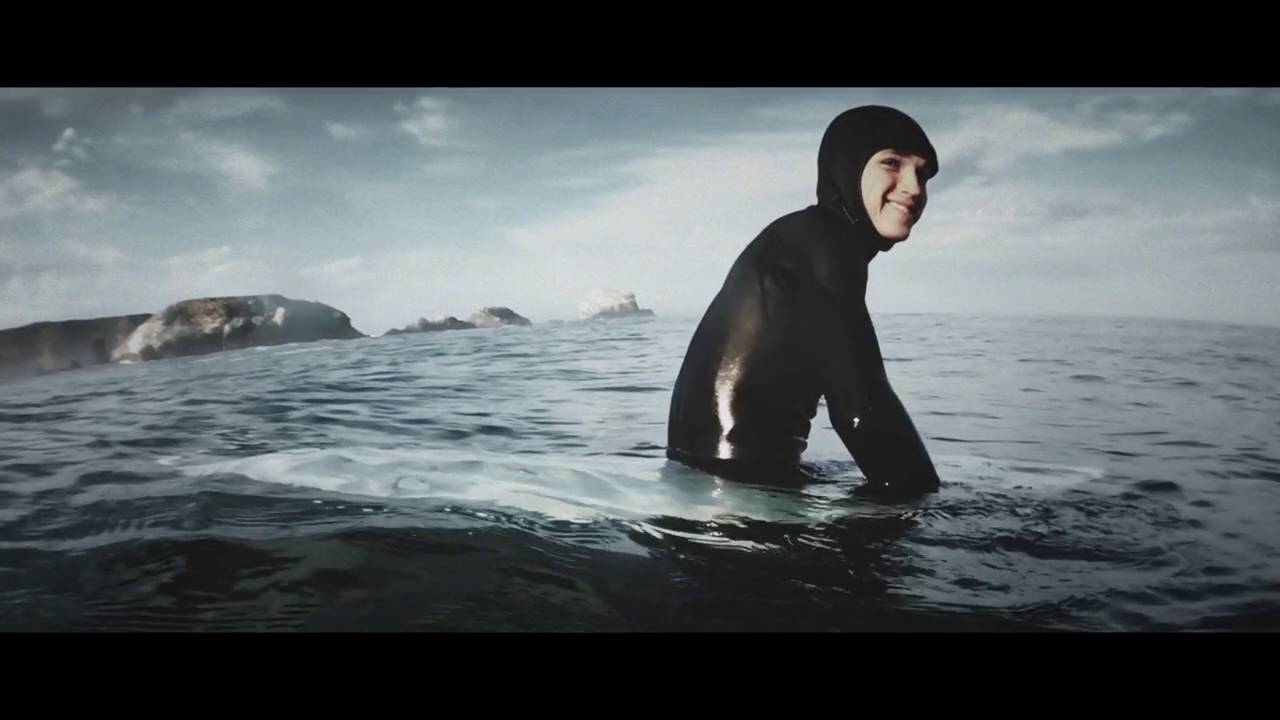 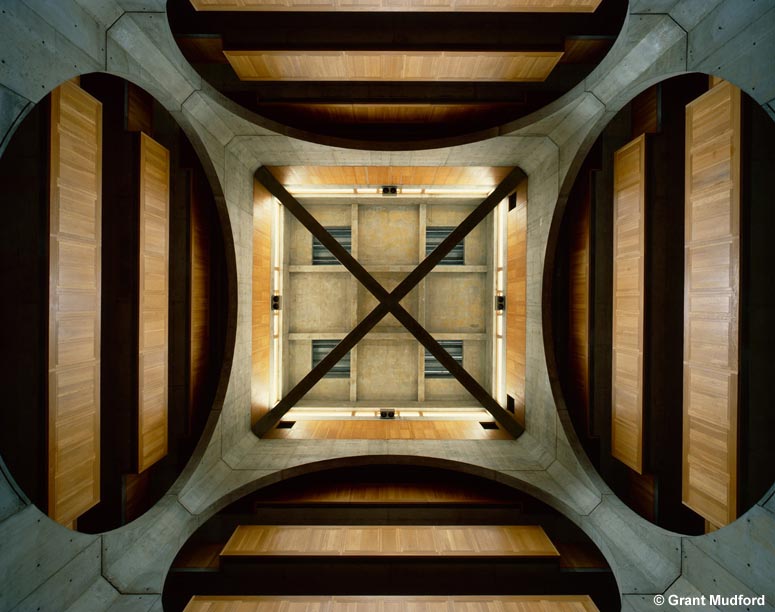